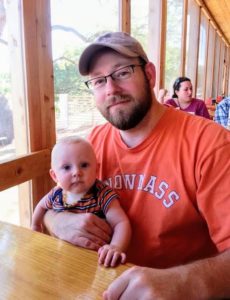 Chris Stauffer is the father to 5 beautiful children.  His introduction to placenta encapsulation came when his wife, Erica, gave birth to her 4th baby and said that she was going to encapsulate her placenta.  His initial thought was how disgusting that was but being a supportive husband, he didn’t say a word and instead agreed that it would be a good thing for her to do.  After the first few days of giving birth, he noticed that Erica had renewed strength and energy and seemed to be doing much better overall after this birth.  It was then that he became a believer in placenta encapsulation.

Chris’ wife is now a successful doula in the Austin area and student midwife who wanted to give her clients the benefits of placenta encapsulation but her studies kept her too busy to learn the process.  Chris offered to learn how to encapsulate and thus began his career in the birth field.  He wanted to train with the highest safety precautions while learning all of the ins and outs of encapsulation from its history to scientific studies as to consumption effectiveness and so APPA was his clear choice.

Chris enjoys his newfound passion for encapsulation and feels a sense of accomplishment knowing that his work truly helps others and allows families to bond and have a solid start to their postpartum period.  His work also supports Erica in her dream to become a midwife while putting food on the table for his family.  Chris isn’t sure where his birth journey will take him but he is certain that he’s on the best path for himself and his family and is grateful to have worked so hard for his APPA certification.

BBP needs to be updated yearly, have you done your

We try to incorporate a variety of learning method

The APPA store is fully stocked. ⁠ Head over to

Wondering what your capsules could contain?⁠ ⁠

Placenta's come in many different shapes and sizes

Summer is upon us here in the Northern hemisphere

APPA Advance is mobile friendly. You choose when a