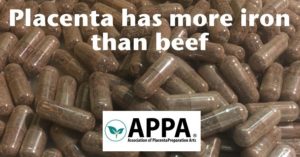 Many mothers and placenta encapsulators have been eagerly awaiting results from research approved by the University of Nevada, Las Vegas (UNLV). Their most recent study, part of a larger pilot, was published on the 3rd November in The Journal of Midwifery and Women’s Health and looks at the effects on iron status when women consume their placenta (1).

To date, most of the evidence of health benefits from placenta consumption has been anecdotal. This is the first randomized, double-blind and placebo-controlled study to investigate the effects of consumption of placenta or maternal placentophagy.

According to the World Health Organization, iron deficiency is the most common nutrient deficiency in the world. Pregnant women are often low in iron and this deficiency can continue or worsen after birth and while breastfeeding. Common symptoms of iron deficiency are fatigue, weakness, dizziness, vagueness, and irritability (2).

Pregnant women have significantly increased needs for iron consumption. The recommended dietary requirements increase from 18mg/day to 27mg/day when a woman falls pregnant and then drop back to about 9mg/day while breastfeeding (3).

In the UNLV study, dehydrated beef was selected as the control due to its similarity in appearance to dehydrated placenta and as a comparison as another heme iron source.

Women were advised to consume two 550mg capsules, three times a day. This equates to 3300mg/day. Participants were unaware if they were taking encapsulated placenta or beef.

This means that if the mother was taking 6 capsules (3300mg of dried placenta/day) it would provide 2.2mg/day of iron. This is about 24% of the recommended daily intake of iron for lactating women.

In order to meet daily iron requirements, the mother also needs to consume a diet high in iron-rich foods and/or be supplementing with iron.

It is especially important if the mother is iron deficient that she should not rely solely on placenta capsules as her only source of supplementation.

Researchers pointed out that the sample size of this study was small at only 23 participants and that all came from a similar demographic. In replicating these findings, a larger sample size could be beneficial.

The research of different methods of placental preparation to determine if different techniques yield higher amounts of dietary iron or improve absorption would be very useful information. Experimenting with different dosages would also be of benefit to see if this increased the iron rebound compared to the placebo.

Although more research is needed to correlate these findings, it is good news for mothers needing to increase their iron intake. The placenta contains a bioavailable source of iron and is a great adjunct to other iron supplementation.

During your prenatal care, there are many tests, q

Monkey's and primates of all sorts do eat their pl

If you could say any one thing to a new parent, wh

Need your placenta encapsulated? You can trust an

The New Year is coming quick! ⁠ ⁠ Have you upd

While we may normally focus on the placenta side o